Expert tips on creating a dog-tastic garden, plus tales of mischief with Rabbit’s sister Gina. 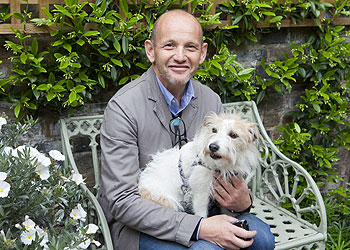 Life goals: run your own design business, make that business garden design, absolutely take your dog to work with you.

Sounds like Chelsea gold medal winner Tommaso del Buono has pretty much nailed it. But how does having a slightly naughty Norfolk Terrier/Jack Russell cross really fit in with an international career designing high-end gardens?

We spoke to Tommaso about life with Gina, including squirrels, cat flaps and one particular disgrace involving baby deer.

“I’d been thinking about getting a dog for a long time but I travelled so much it was difficult,” he told us, “When I set up my own practice, I decided now was the time.”

“A friend’s dog was pregnant and once I saw the puppies that was it. I had wanted a boy dog – Gina was meant to be called Gino. But she was the one I loved.”

A cheeky little bundle of Norfolk Terrier/Jack Russell cross, Gina’s got a big personality for such a wee pooch.

“She’s very clever and very affectionate and she’s quite naughty,” said Tommaso, “She’s very small – but has no notion of her size.”

In fact, here at LoveMyDog we’ve got a pretty good idea about Gina’s personality; she’s the sister of our very own Rabbit, both pups of the lovely Tulip.

Once an unstoppable bouncing force of nature, Gina’s now a grande dame of 12 years old and has slowed down a bit – thank goodness.

Tommaso explained, “She still to this day likes chasing sticks, balls and squirrels. In no particular order.”

Just one look at Gina’s beady little eyes and you know it: that doggy boisterousness has landed her in hot water more than once.

One particularly epic squirrel hunt saw her scurry enthusiastically into the undergrowth in hot pursuit, only to scurry out equally swiftly sporting a nasty bite on her neck. It seems that Gina had accidentally trespassed on the property of a large and fearless rat.

And sassy Miss Gina’s not afraid of taking on much bigger creatures.

“On one occasion she chased some baby deer,” grimaced Tommaso, “I was working on a project in Berkshire, near Newbury. Luckily she didn’t catch them but that was the last time I could take Gina to that particular project …”

Obviously Gina is queen of the castle when it comes to her own garden, though. Tommaso and his partner have a country place where Gina has room for lots of doggy manoeuvres – and she makes sure the humans don’t get too comfy after a tough week at work.

“She always tries it on!” exclaimed Tommaso, “We’re constantly having to throw balls and sticks for her.

“Dogs and gardens don’t necessarily mix very well. She’ll dig where we’ve been digging and she runs through newly-planted beds – but she’s a small dog so the damage is limited.”

Even in the urban sprawl, the pair make the most of London’s green spaces. When Tommaso lived in Bayswater, Gina was a regular in Hyde Park. Her favourite hang-out now, though, is hip Victoria Park, which is particularly well-stocked with squirrels, not to mention a temptingly big lake for cooling doggy paddles on a sweltering day.

Having a four-legged best buddy has actually helped Tommaso when working with dog-owning clients. There’s nothing like experience to give you a special insight when asked to design pooch-friendly areas, so he’s all over important touches such as non-toxic planting and dog-friendly ponds.

“We don’t design around the dog but you have to bear the dog in mind,” he explained, “One thing that’s really important is making a place secure for a dog.

“I used to have a cottage in the middle of a field and Gina could get through the cat flap. She was very used to letting herself in and out and dogs are quite curious – they do like to explore.”

Everyone agreed the shelter should stay, so they left it in situ but designed a bespoke metal grille to prevent the owner’s inquisitive Pomeranian dogs from wandering in.

Overall, it sounds like a bonus to us – hire Tommaso to design your garden and you get to hang out with Gina too.

“Still to this day Gina and I are quite inseparable,” he said, “She’s come with me to many sites, on many projects. Many clients know her and she’s come very much part of the office – and part of me really.”

For more proof that gardens can be dog-tastic havens AND gorgeously designed, check out the Dogs Trust garden at RHS Hampton Court Flower Show on Tuesday 5 – Sunday 10 July. 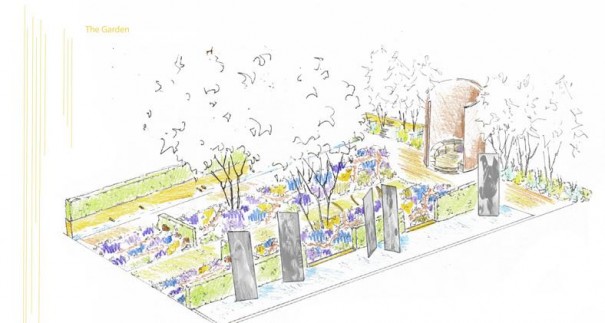 Designed to celebrate the charity’s 125th year, this contemporary space includes sneaky sniffer tracks woven into the herbaceous borders for dogs to forage and sniff out treats. We might even have a try ourselves.

You know what your Instagram needs? More dogs. We’ve put together five of Instagram’s best pets :) 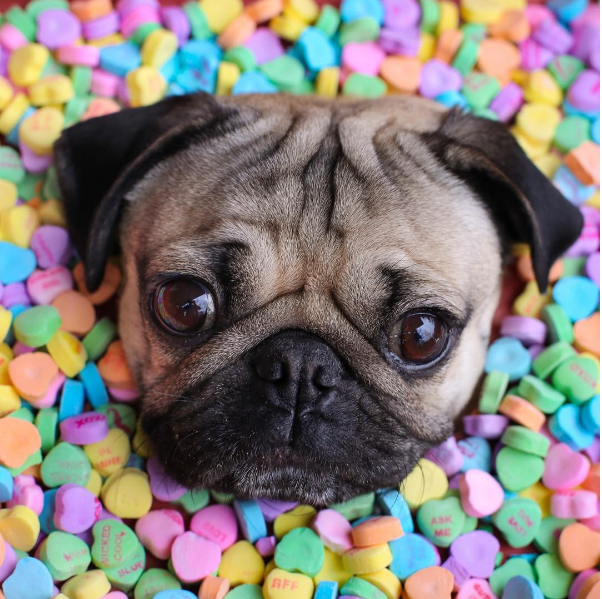 Some people think Instagram is a place for food, sunsets and legs in the bath. They’re wrong. Instagram is the place for dogs. From tiny corgis to hipster pugs, there’s no shortage of loveable canines to make your feed the happiest ever. Too many to choose from, in fact; so we’ve narrowed it down to five of our favourites to get you started.

Who is he? The underdog with the overbite. 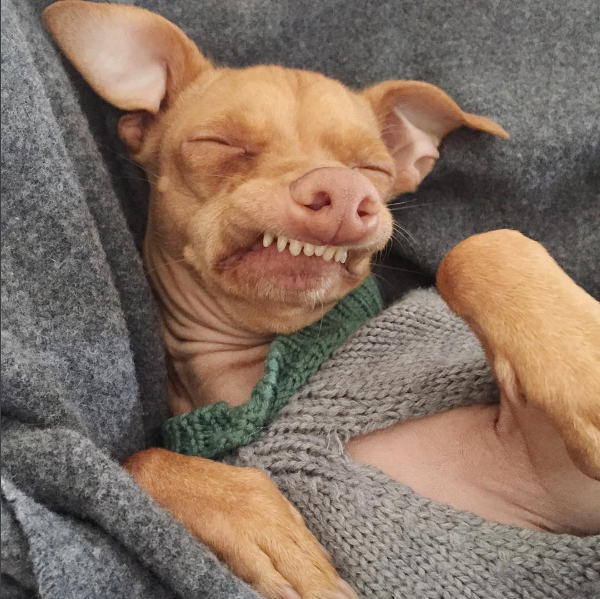 Chiweenies are a cross between a chihuahua and a dachshund. They’re also obscenely cute, as you’ll learn if you spend as much time as we do fawning over Tuna Melts My Heart’s Instagram feed (which is a lot). With his pronounced overbite and wrinkled-up chin, Tuna is an endless source of reaction faces for every situation. Oh, and did we mention he has impeccable fashion sense? 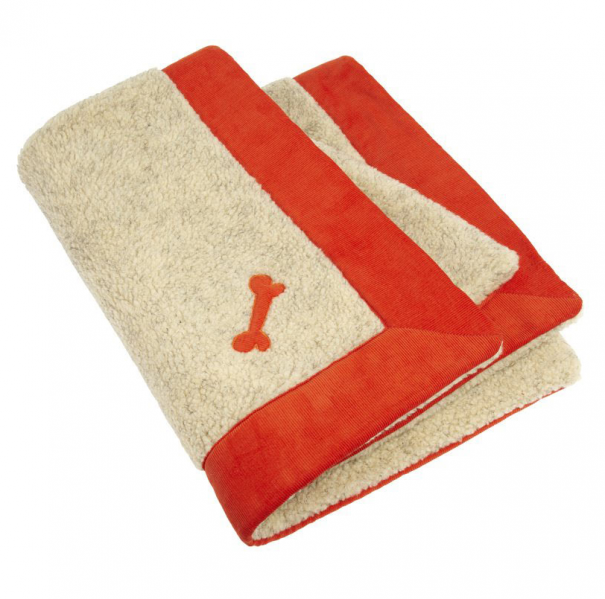 Who is he? The self-declared king of pop culture. 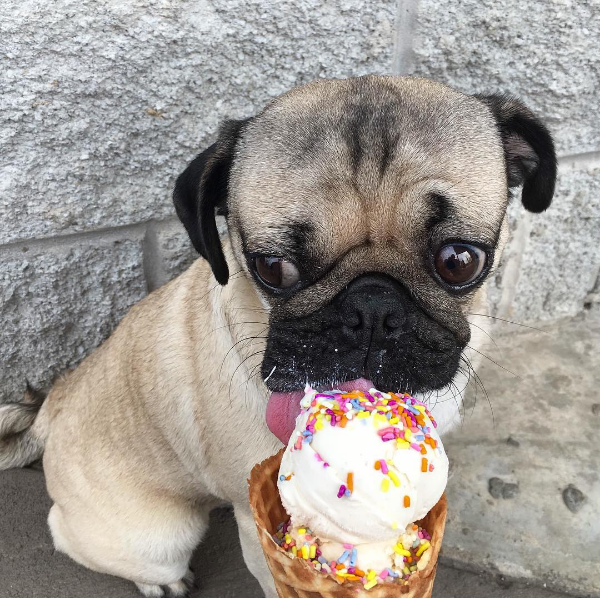 It’s official. Doug the Pug is our spirit dog. If he’s not basking his wrinkles on the beach, he’s dressing up as Harry Potter, salivating over wine and pizza, or meeting Dolly Parton on the red carpet. But his life isn’t all about the glitz and glam: Doug is a also registered therapy dog with a charity called Pets As Therapy; showering care homes, hospitals, hospices and schools with pug-tastic joy.

Puggy style: With so many celebrity jamborees to grace, Doug needs to travel like a VIP. This Sidworth tweed designer pet carrier is oh so smart – and ridiculously cosy. 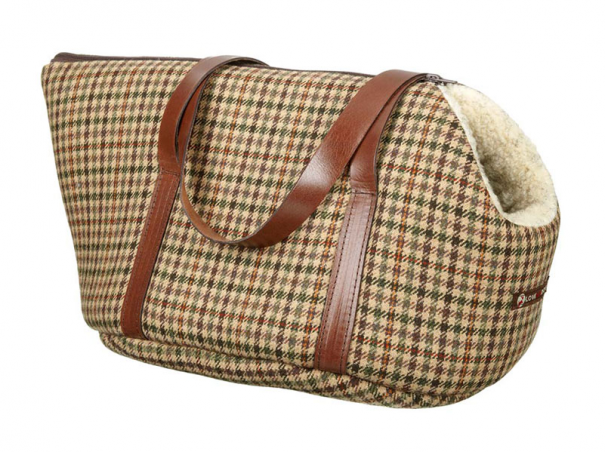 Who is he? A Frenchie, and complete and utter heartbreaker. 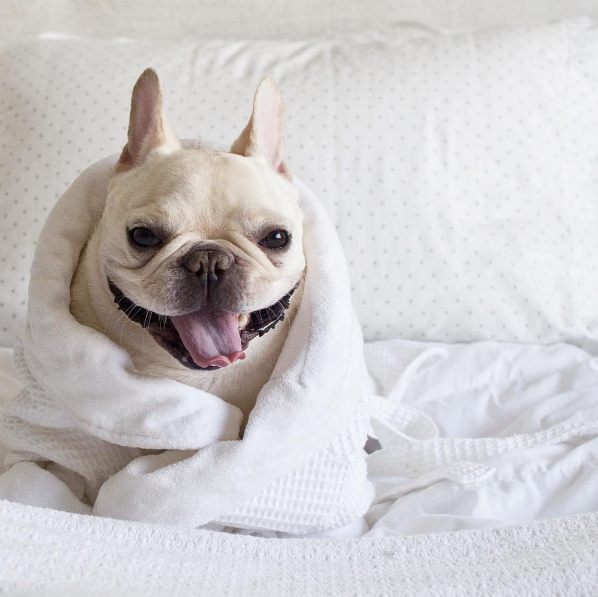 The hippest name in the doggy world, the sharpest dress sense and the biggest smile; Sir Charles Barkley the French bulldog is a joy to follow. There are also excruciatingly adorable throwbacks of baby Barkley on a regular basis too (just in case you weren’t smitten enough).

Frenchie dressing: Got a Sir Charles B of your own? Treat them to this grey harris tweed dog bed for wrinkly snuggles galore. 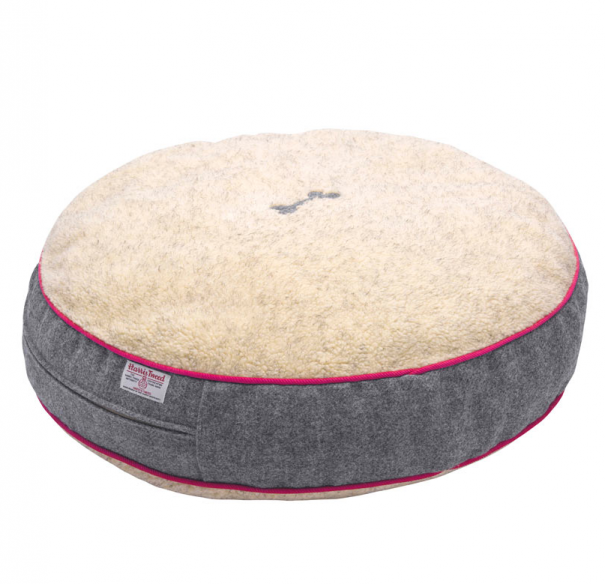 Who is he? The happiest, fuzziest shiba inu on Earth. 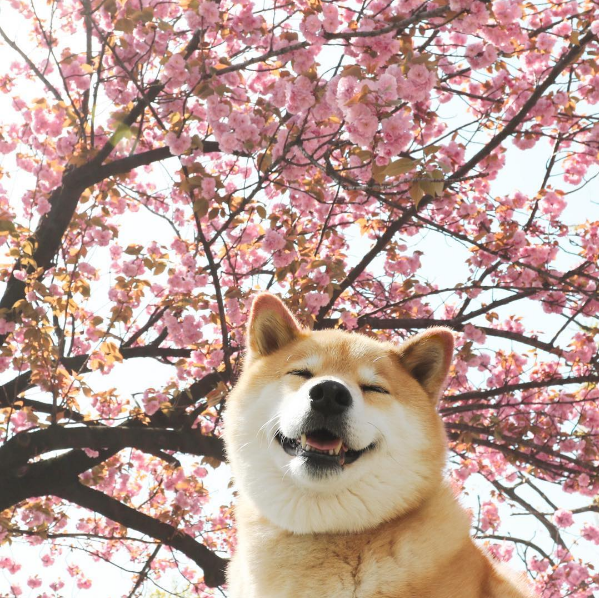 Can we be honest? We’re really, really jealous of Maru. Not just because he has the most chilled life ever with his owner in Japan, but because he’s more photogenic than we’ll ever be. Follow him for his joyous smile, infinitesimal fuzz of fur and general handsomeness.

King of Shiba: Maru, are you reading this? We really need to see you modelling this Bow Wow handmade dog bow tie ASAP. You gorgeous devil, you. 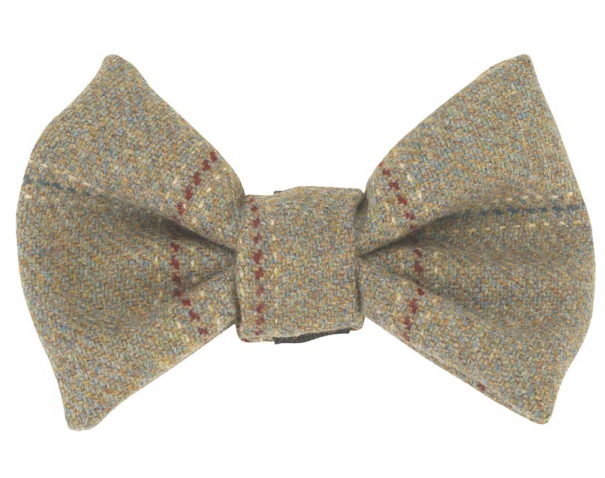 Who is she? 14-year-old shih tzu that’s gone from stray to star. Completely fabulous. 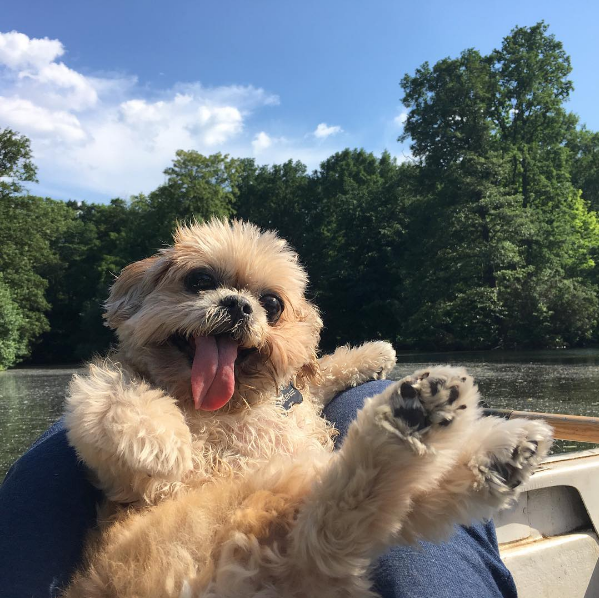 Young pups often take the limelight in dog shelters, but Marnie The Dog is changing all that. This senior lady, famous for her cheeky tongueand head tilt (caused by vestibular syndrome) is raising awareness of older dog adoptions, having been adopted herself at age 10. She was found partially blind and in a frightful condition. Now, she can be found occasionally falling into the arms of celebs like Taylor Swift and Tina Fey. Amen to that.

If the shih tzu fits: Give your pooch some sartorial flower power with this Amberley Liberty print dog collar lined with buttersoft suede. 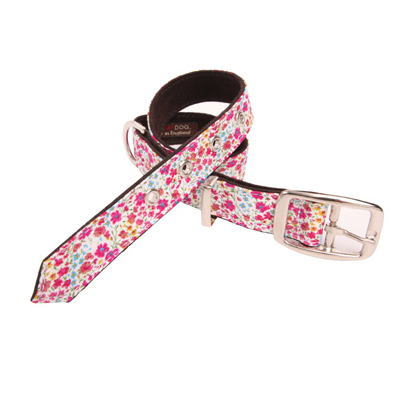 Canine couture in the press 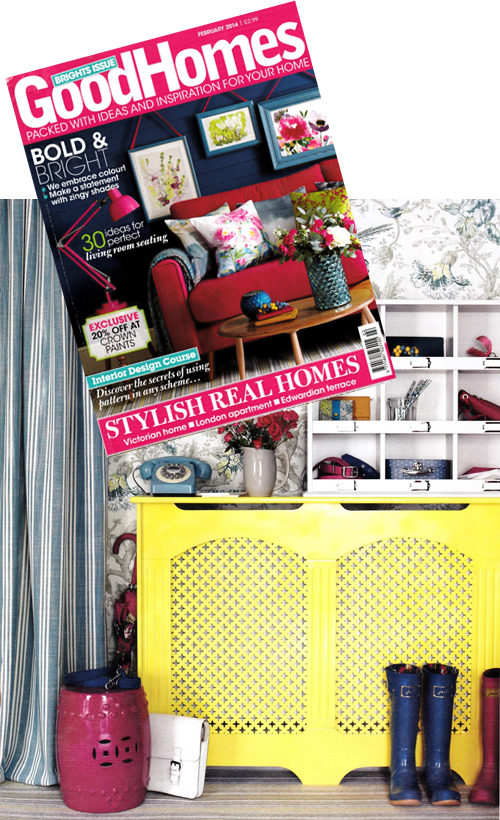 It might be grey outside, but that’s no excuse for not having some colour in your life! Good Homes magazine is packed with ides and inspirations for your home. LoveMyDog features in February’s bold and bright edition in an article titled ‘Bold Moves’. END_OF_DOCUMENT_TOKEN_TO_BE_REPLACED 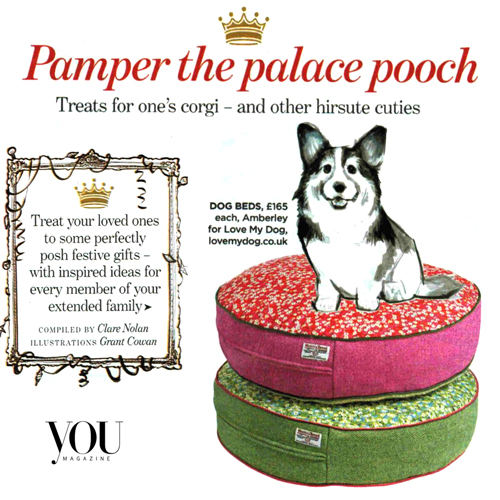 Our designer dog beds have just been featured in the latest glossy You Magazine in an article called ‘Pamper the palace pooch’. Compiled by Clare Nolan and beautifully illustrated by Grant Cowan, the article featured festive gift ideas for pampered pets including two of our Liberty print Amberley and our other luxury dog beds.

Maisy May – Pooch of the Month September 2013 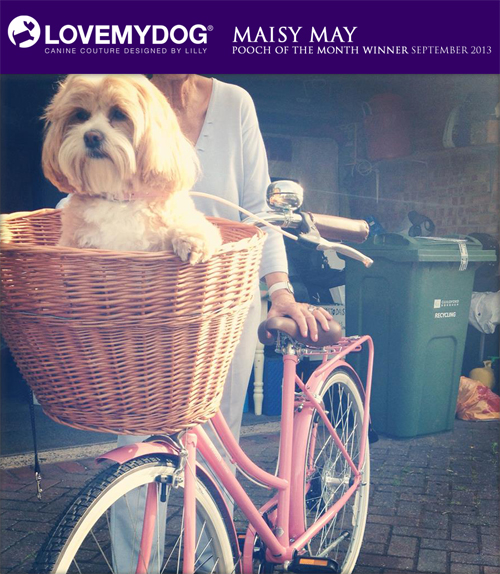 Say hello to Maisy May, LoveMyDogs’s ‘Pooch of the Month’ for September 2013.
END_OF_DOCUMENT_TOKEN_TO_BE_REPLACED

Tags: canine couture, designer, dog lead, dogwear, pooch of the month
Comments Off on Maisy May – Pooch of the Month September 2013 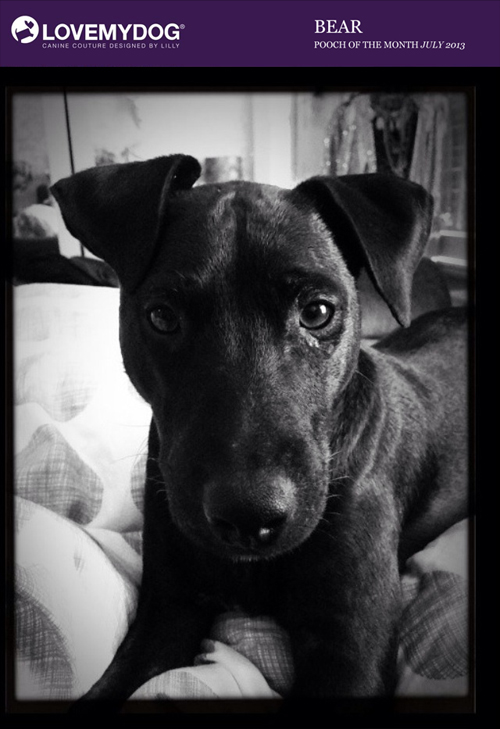 Congratulations to Bear, who is our latest ‘Pooch of the Month’. Keep an eye out for the postie Bear as a Bow Wow Tie is on it’s way to you! END_OF_DOCUMENT_TOKEN_TO_BE_REPLACED 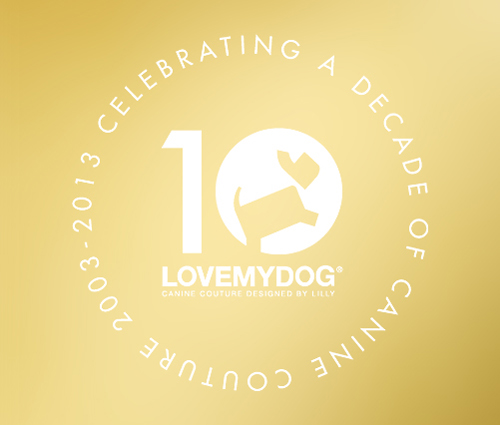 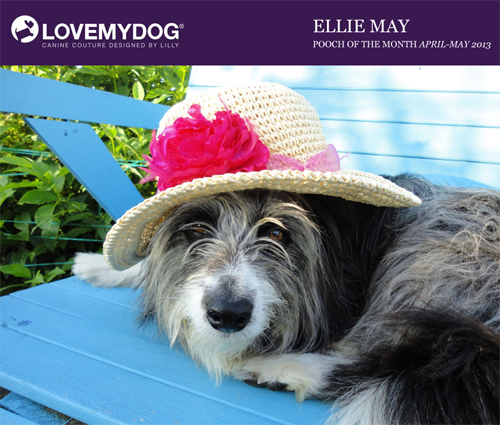 Congratulations to our latest ‘Pooch of the Month’ Ellie May, who has won a Spencer Blue Corduroy Lead to match her blue bench. The Spencer range of trendy, retro-style leads from LoveMyDog are gorgeously soft and are professionally hand-finished by traditional British belt-makers.

Have you entered our monthly competition yet? You could win something from the LoveMyDog collection, and all the monthly winners are entered into a draw to win a bespoke fitted dog coat worth £1000. It’s really easy to enter our Pooch of the Month competition, just enter via the competition tab on our Facebook page or use the link below.

Click here to enter your photo (but make sure you use a computer rather than a tablet or mobile): LoveMyDog ‘Pooch of the Month’ Competition 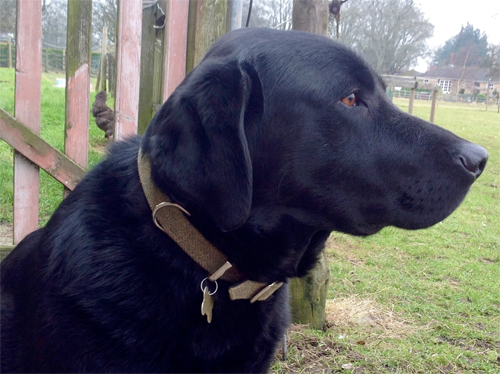 Rabbit’s had some more fan mail! The latest letter we have recieved is from Haddo, a beautiful labrador who is now the proud owner of a Thornby tweed dog collar.

My new tweed collar arrived today and as you can see I am now quite the country gent. If only Mummy loved me enough to buy me the matching bed! 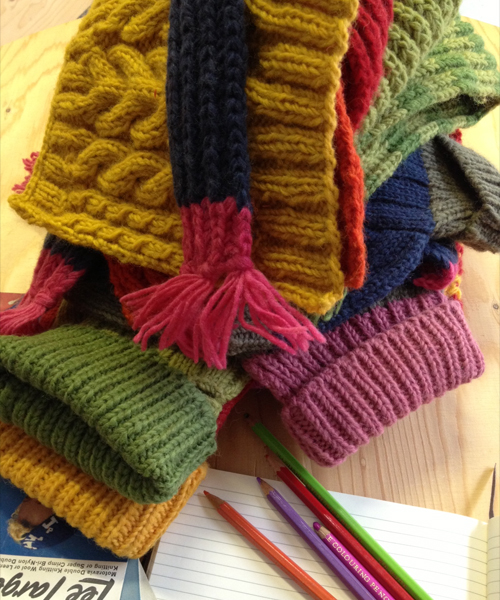 Brrrr. Have you or your pooch been feeling the cold in these past few weeks? LoveMyDog has a range of dog jumpers and sweaters to keep your loved ones cosy (and matching scarves for owners).

Dreams of playing fetch in the park on a warm summer’s day currently feels like a lifetime away but LMD Creative Director Lilly Shahravesh is already thinking way past summer!

“I love this time of year when I start thinking about new dog jumper designs for the new Autumn/Winter season. I always get out my stash of knitting samples going back nearly ten years and have a good rummage”

Lilly’s keeping her new designs top secret at the moment but keep your eyes on our Facebook, Twitter and Pinterest pages for sneak peeks of new designer canine couture items (including those warm dog jumpers) throughout the coming months.