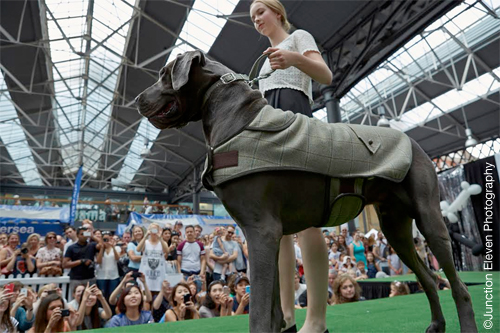 We are very sad to report that Baruch has died at the age of 4 1/2 years old. Baruch, who was also known as Puppy, was one of the two Great Danes that helped out at our Paw Pageant fundraiser for Battersea Dogs & Cats Home.

Baruch was supporting charities until the end. In his death he will continue to help others as he did in life. His body has been donated for research to the Animal Health Trust and his heart has gone to Liverpool University to help in their research into DCM in Great Danes.

Baruch’s owner Sharon comments, “We have lost many dogs but although very upset about them have never felt the devastation we feel now. Even our vet tweeted that he was devastated. The house is deadly quiet but he wasn’t noisy. Bellamy is very subdued too.

Yes he was called Puppy by Stuart as the name Baruch was one that Stuart hated. I liked the name for the meaning which was blessing and he was a true blessing.

Stuart has always written a poem when our Danes have died and has done so for Baruch.  It is a tear jerker I am afraid but here it is”

He gave pints of his blood, the donor supreme
To help other dogs in crisis, his vet would deem
With never a fuss the precious blood given
Saving many a life to duty was striven

He gave us his love, unconditional and free
And made us feel good which all will agree
Goodbye Baruch we miss you so much
No more hugs and kisses or even a touch

Our thoughts are with Sharon and Stuart at this difficult time.

You can donate to Baruch’s memorial fund here (all monies will go straight to the Animal Health Trust).

If you, or someone you know, have recently had to say goodbye to a loved one then the DogsTrust have some helpful advice on bereavement here.