The Campaign for Wool 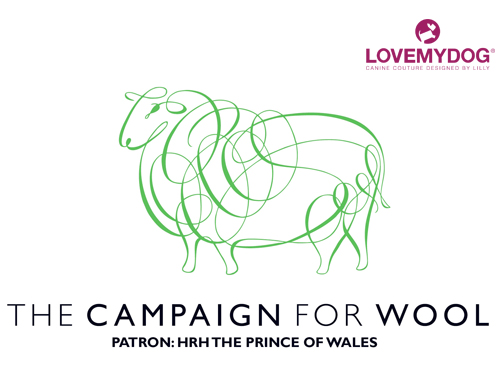 LoveMyDog uses only pure virgin wool for its genuine Harris Tweed dog fashion lines and is proud to be a brand supporter of The Campaign for Wool. Fellow brand supporters include Selfridges, World of Woolcraft and Vivienne Westwood.

The Campaign for Wool was initiated in October 2008 by His Royal Highness the Prince of Wales, who had observed that the wool industry was facing enormous and unprecedented challenges. The price of wool had plummeted to the point where farmers were being paid less for their sheeps’ fleeces than the cost of having them shorn.

At the same time, sheep numbers were declining across the world, from Britain to Australia and New Zealand, and some farmers were losing confidence in the future of the wool industry.

A parallel threat came from new man-made synthetic fibres, often oil-based, which were providing stiff competition in the areas where wool had traditionally triumphed – fashion, carpets and insulation.

And what would the environmental implications be? Wool is one of the most environmentally friendly and sustainable of fibres. At a time when concerns about landfills occupy us all, why on earth were we turning our backs on wool?

These were the issues which provoked the HRH the Prince of Wales into convening a meeting over dinner at Clarence House with a diverse group of stakeholders with a connection to wool – from sheep experts to wool marketeers, wool traders to fashion designers and carpet manufacturers.

You can find out more about the Campaign for Wool here.