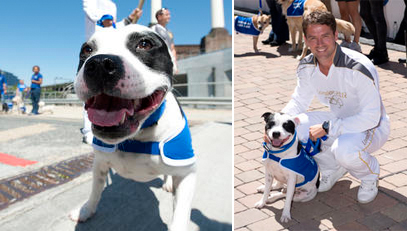 Handsome Rory became an international star when he helped England footballer Michael Owen carry the Olympic Flame through Battersea’s London centre.Rory was selected to help Michael because he’s such a friendly, happy boy who loves being with people. He enjoys staying active, so loved the opportunity to run and walk alongside Michael as he carried the Torch. The pair walked past a doggy Guard of Honour of 50 Battersea dogs, and Rory was impeccably behaved as he strolled along in his blue Battersea coat.While his new owners won’t need an Olympic Torch to keep Rory entertained, he is looking for a home where he will be kept busy and receive lots of love. He quickly won over Michael, who tweeted a photo of Rory to his 1.5 million followers, saying: “I’d love to take this Staffie home but I don’t think my current dogs would have it! May ask one of my family!”Do you have space in your family for lovable Rory? More details are avaialable from Battersea here.